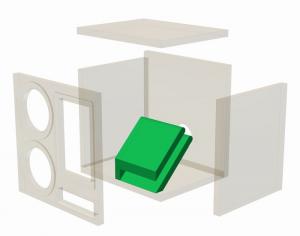 In order to keep the construction of STUDIO 1 as simple as possible, it is advisable to start with the front panel, where slot for the bass reflex port has already been cut out (accuracy and true sided positioning of the opening is extremely important because of the mirror-image arrangement of a pair of Studio 1). Then both side panels and top and bottom can be glued onto the front panel (the rear panel should not be mounted in this step).

While the glue is curing, one can proceed with the bass reflex port. After the three panels of the channel have been cut out according to the drawing, they can be glued / screwed together, starting with the internal side panel (also pay attention to true sided assembly). Now, the curvatures at the edge of the port should be countersunk, because this is no longer possible after the port has been fixed inside the housing. To do so, a router with an appropriate round cutter head suits best.

To ensure optimal fitting of the channel, it can now be tentatively held in the respective area in the housing and glued there after perfect alignment. Through the still open rear panel, the corners / edges of the housing and the bass reflex port can be sealed with glue. By means of a rasp, the outer edges of the front panel can be slightly rounded off. The next step should be the pre-drilling of the mounting screws for the crossover on the rear panel (do not drill through the panel) behind the position of the waveguide and shortly above the terminal. This makes the mounting of the crossover inside the cabinet easier later on.

Finally, the rear panel can be attached onto the housing and one can start milling out the holes for the speakers and the waveguide, and with the jigsaw one can cut out the opening for the terminal according to the drawing.