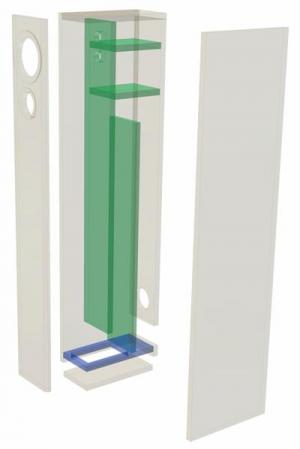 Simply glue the boards together (butt-jointed) as shown in the parts list. The base alone remains removable. The crossover is attached to the base later. The damping material can be inserted through the opening in the base of the cabinet. Before gluing the boards together, cut the two 35 mm openings in the front separating wall, which will accommodate the bass reflex tubes later by passing them through the speaker driver cut-outs.

In order to pass through the cable from the crossover to the ST 77terminal unit, it makes sense to drill an 8 mm hole in the rear separating wall directly in line with the cut-out for the terminal unit.

Two mats of damping material are required. Cut these in half lengthways first. Cut one of these into eight equally sized pieces. Four of these are placed through the loudspeaker opening and four through the BR 6.8bass reflex tube to make internal absorbers. This is best done with a rod. Place two of the remaining large pieces through the opening in the base into the front part of the TML and one piece into the central part, as shown in the illustration. The rear part does not need damping.