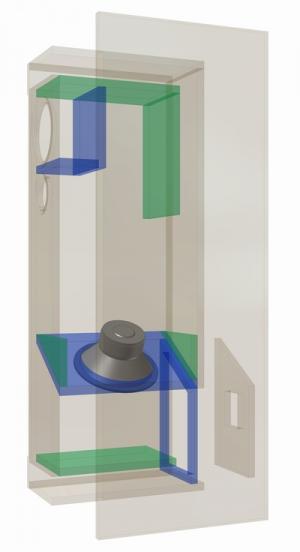 Building a double-sided ventilated bandpass cabinet isn't as facile as for example a closed box. However, if one follows the instructions step by step, even this build can be accomplished without problems.

Beginning with one side panel, the baffle, the upper rear panel, the top panel and the bottom panel as well as the reflex channels and the panels for the midrange cabinet are glued on top. A hole of about 6mm in diameter is to be drilled into the midrange cabinet to wire the AL 170 - 8 Ohm (seal properly!). In order to keep the width of the box as small as possible, the separation wall, on which the TIW 200 XS - 8 Ohm is mounted, is tilted through 30°. This board is previously provided with two triangular plates to ensure the right mounting angle. Again, a hole of about 10 mm must be drilled through the mounting plate of the woofer to rout the wires for the three chassis. This hole also needs to be sealed well. The whole construction can now be slid into the box and glued on.

Before doing so, it is strongly recommended to doublecheck the exact position of the woofer's cutout. A displacement of only 1 or 2 millimeters to the top or the bottom can already cause the TIW 200 XS - 8 Ohm to not fit any more. A trial fitting of the woofer should be carried out by all means before gluing the frame into the cabinet. Moreover, the mounting holes must be drilled and the screws should be screwed in and out once to facilitate the mounting of the woofer later under the cramped conditions inside the cabinet. Finally, the mounting frame for the lower rear panel is glued in with a recess of 19 mm, and the second side panel can be attached.

The chamfer is discontinued around the reflex channels only for optical reasons. If no router is on hand, the chamfer can also be cut continuously over the whole height of the box with a circular saw.

Optionally, a wooden baffle can be added as can be seen in the picture (here: Acacia). The rest of the build is not affected by this addendum, except for the chamfer and the recesses of the chassis, which now are located on the additional front plate. For optimal clearance it is well proven to mill out the holes for the reflex channels with a profile miller after attaching the front plate. Lastly, a shadow gap makes for a neat transition between the corpus and the baffle.

One mat of lamb's wool is divided lengthwise and each of the two stripes is coiled up and stuffed into the midrange cabinet.
In order not to compromise the efficiency factor in the low frequencyrange, the bandpass cabinet receives no damping at all.

“We would never have anticipated the quality of sound that we heard – amazingly three-dimensional mid-range sound, both tangible and direct, as one expects from very good full-rangespeakers. The tweeter was even more transparent than we have seen it perform in the past, thanks to the high separating frequency. And what part does material resonance play? This range certainly does not soundunpleasant or intrusive, probably because it fades away so quickly and is within a very narrow bandwidth. Vocal “s” sounds come across completely naturally and at a reasonable volume, but what you notice is that they are very energy-charged without being at all intrusive. This sound is, after all, being radiated by a large cone area rather than being generated by a comparatively tiny diaphragm. Dynamic attacks on guitar strings explode with sound while cymbals acquire real substance. This whole tapestry is founded on a carefully balanced lower frequency range and fantastically deep, taught bass. Up to now, we have never had the pleasure of hearing that from a bandpass cabinet. The drivers complement each other perfectly and the transitions are absolutely seamless. As we have often noticed with other systems based on full-range speakers, the three-dimensional soundstage is very accurate and clearly defined; the low-bass and broad-range treatment allow the listener to concentrate on the musicians. The icing on the cake is the highly surprising level accuracy: when a very large, powerful church organ floods the listening room with deep bass, it is enough to put one in awe. Okay, this does require a fair amount of amplifier power – with a 60 watt symasym amplifier, this Visaton speaker sounds great, but if you want to make it really shine, go for a good 200 watts and more.

The introductory initials of the VIB 170 BP could stand for “very interesting box”, which puts it in very good company if one looks back over its family tree: this VIB really deserves to be bear the title “very interesting”."