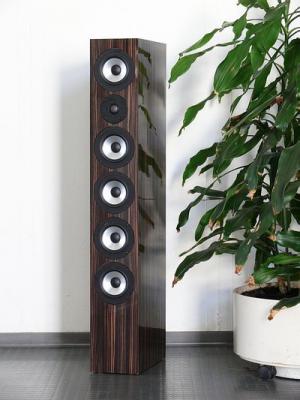 With a cabinet volume of just over 56 litres, the QUINTETT could not be said to be a small speaker. Despite its size, it comes across as elegant and sophisticated, thanks to the arrangement of its drivers and the slim baffle. Fitted with no less than five AL 130 - 8 Ohm, it is generously equipped but stopping short of exaggeration.

Four of the AL 130 - 8 Ohm, with a combined diaphragm area of 316 cm², are fitted in the bass reflex cabinet and generate sufficient bass, so no subwoofer is needed. The QUINTETT is based on a development idea suggested by the German "Klang & Ton" Hi-Fi magazine which was then finalised by modifying the crossover.

The uppermost of the five AL 130 - 8 Ohm, which is neatly housed in its own enclosed 5-litre cabinet, together with the tried-and-tested KE 25 SC - 8 Ohm ceramic dome tweeter, produce clear mid-to-high-range soundabove 500 Hz.

In terms of its sound quality, the QUINTETT can be described as rich in detail and very precise. It uncompromisingly shows up every defect in a recording but, on the other hand, reproduces good recordings perfectly, without the slightest distortion and with remarkable positioning accuracy. Bass sound is reproduced very accurately and clearly and, thanks to the be-wiring connections, can be controlled separately from the mid- and high range frequencies. The QUINTETT is, as a result, not a speaker that produces some softened-down mash, it is, on the contrary, a realist that can easily cope with maximum volume settings.