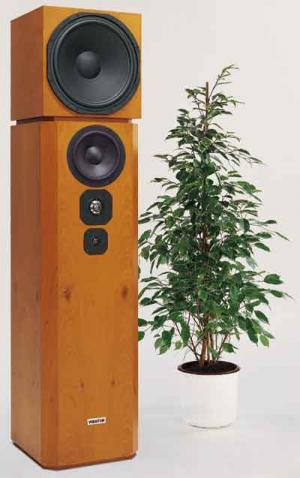 The ATLAS DSM MK III is a superlative column speaker - not only because of its impressive height of 1.70 m, but above all because of its acoustic qualities.
The 5-way combination employs the TIW 400 8 Ohm high-tech speakers as long-stroke woofers, TIW 250 8 Ohm 's as internal drivers, GF 200 2 x 4 Ohm 's as fibre-glass mid-bass units and the tried-and-tested DSM 50 FFL 8 Ohm and DSM 25 FFL 8 Ohm titanium cones as mid- to high-range unit.
After considerably improving the bass range in the MK II version compared with its predecessor by using the TIW 250 8 Ohm as the inner driver, the current model has been further refined as the ATLAS DSM MK III - by including the GF 200 2 x 4 Ohm as the mid-bass unit. The result is far improved pulse dynamics, leading to even more pleasurable listening especially at peak levels.
Let it be said to all owners of the ATLAS DSM MK II, that conversion to the MK III version is remarkable easy. The crossover unit of the MK II has been retained with no change. The GF 200 2 x 4 Ohm can be fitted straight into the cut-out in the baffle of the WS 21 BF and its rim will neatly cover up the existing screw holes.

"The Atlas DSM MkII is able to generate bass sounds that are simply breath-taking without the slightest effort and at a remarkably high level of purity. This Visaton system convinced even the most hardened sceptic thanks to its beautifully full-bodied and yet clearly differentiated bass. During tests, the Atlas DSM Mk II rocked and rolled with such verve that it warmed everyone's hearts."

Even at "normal" living-room volumes, the test CD used by the testers at "Stereo" came across beautifully clearly and surprisingly dynamically. The reason was the excellent efficiency of the Atlas system, whose finely balanced dynamics and wonderfully precise musical timing put it at an extremely high level.