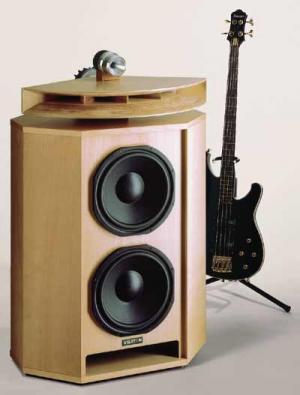 It is well-known that there are two types of loudspeakers: hi-fi speakers that produce the most accurate, unaltered sound possible, and disco or musician's speakers, where the top volume level is of the utmost importance. These volume levels are normally only possible with horns but these often cause coloration of the sound. The MONITOR 890 MK II / TL was designed specifically to combine the best of both worlds. In the mid-range, we use a driver & horn unit which is so dynamic and produces such undistorted music, that many a horn-disparager has had to admit that this is simply unbelievably "different". Two excellent quality woofers, TIW 360 8 Ohm, mounted in the 180 litre vented cabinet, generate a bass sound pressure that is physically tangible, as you have experienced with concert speakers. Combined with the first-rate TL 16 H 8 Ohm high-range horn, we have created a loudspeaker system that breaks down the previously unbridgeable barrier between the hi-fi and the professional speaker.
We recommend, initially at least, the following level settings: tweeter: -4 dB; mid-range: -4 dB
Thanks to the added impedance linearising unit in the crossover unit, the Monitor 890 MK II / TL is now even better suited to use with critical amplifiers (e.g. tube amplifiers).

Provided you have enough space and a very tolerant partner, we can warmly recommend this major contribution to the art of building speakers to every aficionado of lively guitar-based rock through to subtle and sophisticated rhythm & blues. Although the Monitor set-up is perfectly capable of reproducing classical musical and can cope with lower volume ranges, its strength is definitely in the excellent representation of live-sounding events, full of temperament and dynamism.